This is the first in a series of posts to explain and provide with some basic examples to work on PRU cores in AM335x. The AM335x SoC can be found on famous embedded board BeagleBone Black. The post are:

In all these posts, I will be using softwares (kernel images, compilers etc ) that are recommended by BeagleBoard.org. This post is just an introduction to PRUs, so is anyway useful. Some of the reference that I have used throughout these posts are :

Texas Instruments has this series of processors based on ARM Cortex-A core they call TI’s Sitara Processors. One of these processors that is used in the microcomputer board BeagleBone Black is AM335x . These processors have a very interesting subsystem called PRU-ICSS as can be seen in top right in the figure below. 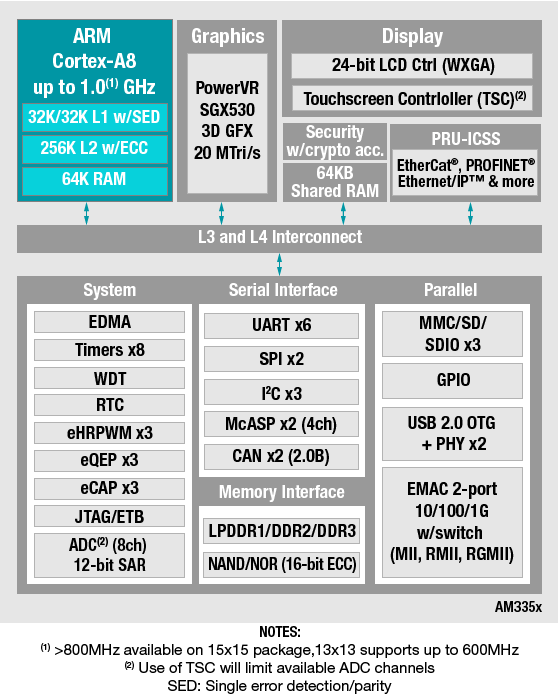 It can be thus said that AM335x has 3 processing cores. Two of them are enclosed in the PRU-ICSS subsystem and are called PRUs, operating at a clock speed of 200 MHz each. The other is the ARM Cortex A8 main processing unit or MPU for short, at 1GHz. This A8 MPU is a high end processor and can have an OS like ubuntu, debian or android running on it. The MPU with all high end processing stuff like caches and pipelines has a lot of limitations regarding to its realtime use. Comes to rescue, the PRU aka Programmable Realtime Units that are present on the same SoC.

At this point, I would like to explain what I mean by “realtime use”. Imagine two events ‘crashing of a car’ and ‘opening up of the air bags’. The time delay between two events should be very much deterministic as its the matter of someone’s life. This is the point where a computer system with deterministic delays, between the input and producing the desired output is needed. In simple terms, realtime systems are used in the arrangements where something critical, in terms of time delays, need to be done. For a realtime system, a developer can easily determine the maximum time delay between a stimulus and its response.

A general purpose OS’s kernel is a combination of some core management softwares along with the softwares to manage and control the hardware. The core part of the kernel has something called scheduler. It schedules various tasks that appear to run simultaneously on a computer system. Scheduler does this using various algorithms. This makes it almost impossible for a developer to determine the time delay between an input and its output. Even in case of interrupts in general OS, the ISR just notifies the system of interrupt and places the required task in scheduler’s queue. Further, availability of hardware features like caches and pipeline system adds to this difficulty in latency determination. There are realtime versions of operating systems too, that allow one to determine the max-latencies, but it has its own cons. The best is to use an independent realtime unit. If you need more justification on why to use a realtime system, see this video by Linux foundation .

The two PRUs enclosed in the PRU-ICSS subsystem are specially designed for high speed, low latency, realtime processing. PRUs are basically 32 bit RISC processors that can work independent of the MPU. As is shown in the figure below, there are many more peripherals that are enclosed in the PRU-ICSS unit. Integration of all these peripherals in the PRU-ICSS aims to make realtime processing easy, reliable and fast. After all that “realtime” stuff above, you may ask, “How does the PRUs make realtime thing possible ? after all they are yet another processing core.” Well, No, they are not “yet another” processing unit, but are special kind of processing unit. They have very limited yet enough number of instructions to program with and almost all of them get executed in single cycle (ie 5 nSec). Each instruction has a perfectly deterministic latency (provided its accessing PRU-ICSS resources, more on this later), has no caches or pipelines and is equipped with enhanced GPIO unit. Using PRUs, you can toggle a GPO at about 50MHz, and believe me, thats a great thing for a SoC having a general purpose OS on it.
This figure down here may look a bit complex, its rather simple and will be very useful once you understand it. 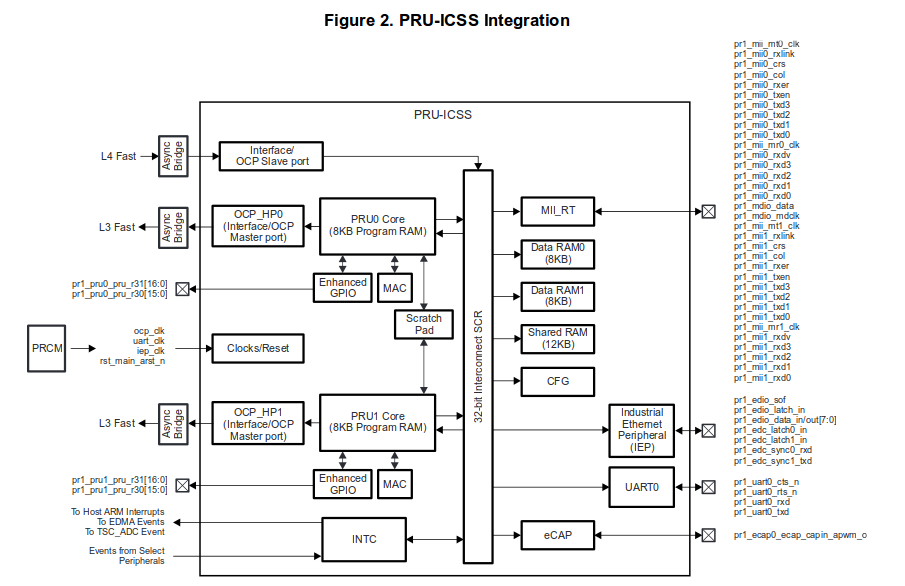 So lets go ahead and understand some of the most used peripherals inside PRU-ICSS with reference to the above figure: 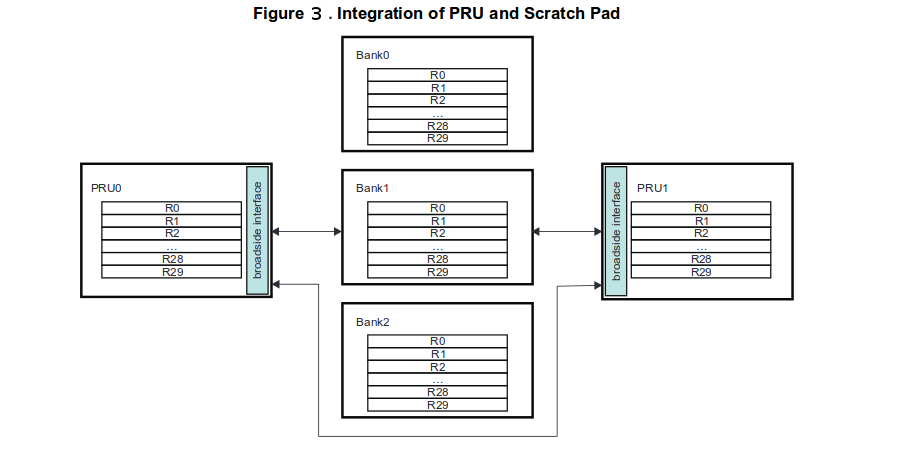 In addition to all this, PRU-ICSS unit also has MAC (Multiplier - Accumulator unit) for each of the PRUs, a CFG unit that contains various configuration registers and a few more peripherals. We will further see how to use PRUs and various in-PRU-ICSS peripherals to make a realtime system in posts ahead.

So thats all for this post. Next to it is this post explaining remoteproc, Linux way of working with PRU.